“Anyone can cook a hamburger, leave the vegetables to the professionals.”

I made it. Long after hearing of Amanda Cohen’s original 18-seat East Village location, I made it to the bigger, shinier, expanded-menu version of Dirt Candy. Far from vegetarian, I do have distinct respect for anyone who can make an impression on the palate, and leave my tummy satisfyingly full, with nothing but delights from the soil.

The “Snacks & Sides” portion of the menu won our hearts immediately, not to mention the liquor infused green juices served up as cocktails.  But first and foremost, the Korean Fried Broccoli is miraculous — Fluffy and light, but crispy and well-seasoned. In fact, we liked it so much we ordered another serving WITH our dessert. If you didn’t know better, you’d think it was General Tso’s Chicken. But better. Yes, really.

The Jalapeño Hush Puppies (served with maple butter) are a generous “snack” portion, but great to split. And the maple butter could be easily consumed with a spoon. That said, when paired with the hush puppies, the maple butter’s smooth sweetness makes a perfect pair to the savory balls of fried goodness.

The Whatever Pickles are kind of a disappointment.

But on to more veggies (obviously). The Mushroom with toast was plated messily but the flavors were very nicely matched. Mushroom in the form of Portobello mousse comes with thin slices of sweet Asian pears and a few dabs of cherry. I preferred the simpler preparations, but the flavors here were worth a shot.

The Tomato dish stood out among the entrees – a tomato cake with smoked feta and tomato leather – it literally tasted like smoked salmon and tomato on a bagel. It was unbelievable. I also really enjoyed the fennel, which came with an indescribable caramelized yogurt, another accompaniment I’d eat on its own without question. But above all else were the Brussel sprout tacos. These are not to be missed. A crispy, steaming mountain of sprout shavings will arrive center table, at which point your company is bound to devour it and all accoutrements.

Save some room for dessert, because this list is unlike anything you’ve ever seen. Alongside our second helping of Korean Fried Broccoli, we also indulged (but is it indulging if it’s veggies?) in the Carrot Meringue Pie. Honestly the carrot center, meringue topping, and delightfully tangy sour cream ice cream came together so seamlessly the graham crust seemed almost just for aesthetic appeal. And all of this without the guilt of having consumed a single bite of meat.

In the end, I only respect Amanda Cohen more after having delighted in her impeccable menu of veg. Not only has she perfected the presentation and flavors, but her excitement about it all is just downright awesome. It’s easy to tell from the menu layout and enthusiasm of every staff member that you’ll find something to surprise and delight you here. 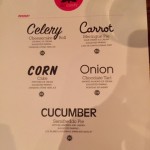